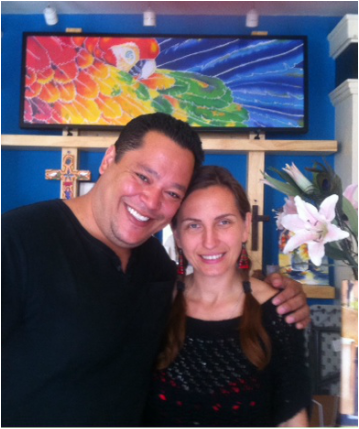 
When Sergio decided to ask Agnes to marry him, he spirited her off to a boutique hotel south of Cancún with a small, private beach—“the best beach in Mexico,” he claims. As night fell, he led her along a path sprinkled with rose petals and flickering in the soft glow of candles to a table with a bottle of champagne. There Sergio knelt in the perfect white sand to present her with the ring. When Agnes had recovered from her amazement and accepted, she laid down some conditions, and one of those was as romantic as his proposal: he must learn to dance salsa so that he could share her passion for it.

At their spa-boutiques, the sense of romance lingers. As you step through the door in Loreto Bay, you enter Agnes’s world, shaped by her well-honed artistic sensibility. Long silk scarves she has painted with graceful floral patterns flutter in the breeze at the entrance. A spray of pastel silk lilies floats on air. On the walls, framed fabric hangings with her vibrant, flowing designs draw your eye. You may finger tasteful, often fanciful, necklaces and earrings as well as boldly colored crafts from Guatemala, India, and Thailand. And if you try on the women’s clothes, soft cottons drape your shoulders or silky fabrics flow over the contours of your body. Agnes also teaches silk painting so that you can make your own scarf, and she produces fashion shows for special occasions.

In the spas, where you may order a massage or a facial, the colors are subtle greys and tans or a calming but vibrant Mexican turquoise. The décor is simple; the gentle music, soothing. The spas have been enlarged in recent years to several rooms with several masseuses in addition to Agnes and Sergio, and they offer a nail salon.

While she and Sergio seem well tuned to each other and to their young son Dominik, who is often coloring or playing games at the table, in many ways they are opposites who have found a balance grounded in their mutual love of travel, adventure, and romance. 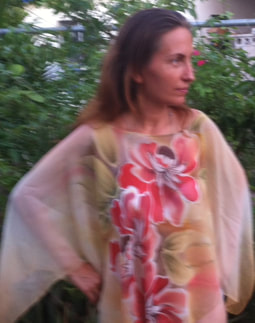 Tall, dark, and naturally outgoing, Sergio grew up in a solid, urban, well-educated, upper-middle-class family in the city of Chihuahua, the capital of the Mexican state bordering Texas. His father worked as a lawyer and politician and his mother, as a psychologist for children with special needs. After graduation from high school, he spent a year as a foreign-exchange student in Boise, Idaho, where he practiced English, ate potatoes, skied Sun Valley, wrestled, and played football on the state championship team.

After earning a university degree in business administration in Chihuahua, he worked for seven years for a firm in Juarez that installed copper wiring, rising to the position of human resources manager. It was a challenge. Many of the 300 employees were illiterate but hard-working indigenous migrants from southern Mexico, who could not speak Spanish and who just wanted to cross the border. Turnover was 30%. By working with the American consulate to assure them legal entry to the U.S. if they stayed with his firm for a stipulated length of time, he reduced turnover to 8%. But the job was stressful, the pay was mediocre, and Sergio longed for adventure.

He followed a girlfriend to Cuba for a few months until the charm of both wore off. For the next three years, he worked at a Cuban restaurant in London, rising from dishwasher to chef. As he says with a smile, “I went to England to cook nachos.” At a nightclub named Break for the Border, where he moonlighted as a bartender, he met Agnes. She was wearing the club’s waitress garb: hair in braids, black apron, black trousers, bare midriff. Because she was enjoying her freedom and the thrill of exploring the world on her holidays, he had a hard time coaxing her to go on a picnic with him.

Agnes has the willowy, graceful form of a model, which she sometimes is, with fair skin and hair and pale blue eyes. A shy girl, she was raised in Communist Poland in the beautiful, historic town of Jaroslaw by parents in the transportation industry. Her mother clerked for a bus company; her father was a train mechanic. His job came with free first-class tickets for the family, so Agnes developed an early addiction to travel.

From her mother she learned to sew, and in high school, she made her own clothes. Her designs were so creative and daring that her brother used to say, “You look like you’re in a circus!” But that taunt didn’t deter her. As a student of fashion design for three years in Warsaw, she sewed costumes for theater and TV productions to support herself. And during a six-week break, she danced in the streets of Paris with a troop of fellow street artists, all wearing costumes she had made. Afterwards, as apprentice to a tailor, she learned to make skillfully crafted garments. But she was eager to see more of the world.

So in 1999 Agnes headed to London to study English. Over the next four years, she supported herself with an array of part-time jobs punctuated by solo trips abroad to Turkey, Italy and Tunisia. For a year she worked as an au pair. She served breakfast at a hotel before she went to class.  She sold designer shoes at Harrod’s. She dressed the models for a Polish designer during London’s Fashion Week. She worked her way up to a position in the royal family’s “Silver Service,” waitressing at formal dinners and serving drinks and canapés at parties for Prince Charles and other royals in museums and palaces, and aboard ships. And late at night, she worked at Break for the Border, where she met Sergio, who convinced her to make the momentous decision that changed her life.

Agnes gave up the rare professional opportunity to study business through the Prince Charles Trust Association when Sergio and a dream lured her to Cancún. “As a child,” she says, “I had dreamed of the sea, white beaches, cruise ships, but I had never seen them.” The dream came true, accompanied by culture shock, hard times and hard work. At first Agnes knew no Spanish and hated the heat. She missed Polish breads, sausages, and cheeses. She missed home. Sergio struggled to support them by studying massage therapy, then working as a masseuse in a hotel while holding down other jobs in sales and at a nightclub.

They were barely making it, so when Agnes had learned enough Spanish, she went to work at a hotel rolling Cuban cigars for tourists. “She was a top seller. She won prizes,” Sergio says proudly. On the side, she sold silk paintings and clothes she had designed and sewn. From then on, her horizons broadened and her outlook brightened. Her Polish reserve gave way to greater confidence and gregariousness. And the cigar money helped pay for their elegant wedding in Poland on September 25, 2004.

As their lives in Cancún stabilized over the next three years, their schedules filled. Agnes worked as a concierge, sold timeshares, and taught silk painting at two hotels. Sergio, who had been promoted to a management position at his hotel, was studying astronomy and archaeology in order to become a tour guide. But in October 2005, the devastating Hurricane Wilma clinched their decision to make a change—Wilma and their second home robbery. With Wilma, the hotel cut his position and Sergio lost his job. With the robbery, Agnes’ mother, who was visiting them, lost her passport. The police only shrugged. “It was a sign,” Agnes says.

In September 2006, they moved to Loreto. “We came here on a hot, dusty evening that turned into rain, “ Sergio recalls. “The next day was one of those windy ones.” They were broke; and their best friend, Miguel, who was planning to launch a business with them, had been called away.  Sergio adds, “I thought this was the biggest mistake of my life.” Costs were high; jobs were scarce. They were on the verge of departing for Cabo San Lucas when Agnes secured a job teaching silk painting at the Inn at Loreto Bay.

Soon Miguel returned, and the three opened La Biznaga (Barrel Cactus), a curio shop behind Islas just off the malecon in town. For the first two months, Agnes and Sergio slept on the shop floor on a leaking air mattress. They shared their quarters with cockroaches and an occasional scorpion, and they took turns using the kitchen and bath in Miguel’s RV. Over time, customers found them, and they found a casita to housesit in Nopoló.

In 2007, Sergio negotiated a deal with the owner of Posada de las Flores to open a spa and boutique in the charming, colonial hotel on the town square in Loreto. For 37 days, he had no customers. Not until the Christmas holidays did they appear. With the two shops, the couple managed to weather the Great Recession, though at times it looked like they would go under. By October 2012, with encouragement and support from Loreto Bay patrons, Sergio and Agnes closed La Biznaga and opened Agnes Boutique on the paseo there.

Since then, business has been steady, and summer breaks have given them the chance to do what they love—travel. This summer it’s Poland and maybe Moscow and Norway. Next summer they hope to add China to a list that includes Greece, South Korea, Thailand, Oaxaca, and California. The trips are for business and pleasure. They visit friends, make friends, take courses and buy products.

In January Agnes and Sergio shared their passion for travel with nine Loreto Bay homeowners, leading them on a personally tailored tour of Cuba. Sergio took some to a baseball game; Agnes took others salsa dancing. They all toured Havana in three classic convertibles and visited the Buena Vista Social Club to hear the famous mid-century jazz combo. The enterprising couple anticipates more Cuba trips in the future.

Despite their wanderings, they have planted roots in Loreto for themselves and their son, and they have lots of ideas for new initiatives. Sergio is the contractor for the home they are building in Loreto now, and he just might do more contracting in the future. They might lead more trips abroad and start a travel agency. Agnes might study interior design or put her training as a personal shopper into practice. As she says, “We’re very flexible.”