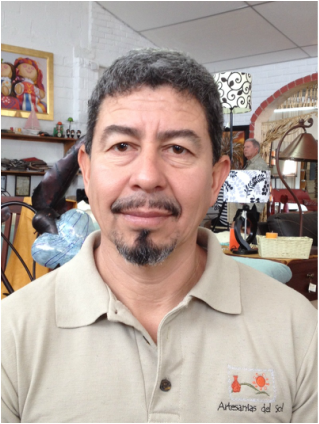 Gustavo Flores Cardenas is an intriguing storyteller and something
of a modern-day Odysseus. Like Homer’s hero, his bearing is noble;
his mind, supple and creative; his demeanor, confident; his character, bold. He is tall, lean, upright in posture. He has journeyed as a stranger through foreign lands, mastered soul-testing challenges, and ultimately returned to Loreto—his home
by the seashore, not far from the home of his youth.

Gustavo was born in the state of Chihuahua in 1963. When he was an infant, his father, a cotton picker, joined with his sisters and brothers and other farm workers to protest the policies of a local politician by throwing tomatoes at him. Later, that politician became president of Mexico and lost no time seeking revenge. He cut off water to the local farms.

This catastrophe drove Gustavo’s extended family to cross the Sea of Cortez and settle in the port of San Carlos on the Pacific coast southwest of Loreto. Today San Carlos is a tourist center well known for fishing and whale watching, but in the early 1960s, Gustavo says, it was empty. His parents, aunts and uncles occupied five of its handful of houses. He and his eleven cousins populated the one-room elementary school. After high school he had to quit his training as an electrician at a technical college to support his parents. At first he delivered take-out burgers.

Then, at nineteen, Gustavo crossed illegally to the United States and found work at a gas station in the Highland Park neighborhood of Los Angeles. For the first five months, he slept under the Pasadena Freeway with other homeless people, many of them addicts with habits that shocked him. To make ends meet, he sold bags of oranges from a shopping cart. And for three years, he worked diligently for the Indian gas-station owner, winning his trust.

His efforts paid off. The owner trained him to run the mini-mart at the station. He helped Gustavo become a legal temporary resident with a driver’s license. He taught him to drive so that he could run errands for the owner’s wife, a strict Muslim woman, who was not allowed behind the wheel. He trusted Gustavo to deposit thousands of dollars in the bank, and he even urged Gustavo to marry his cousin, an offer Gustavo diplomatically declined. Eventually he made Gustavo station manager. As for his shift from 4:00 a.m. to 2:00 p.m., Gustavo mentioned that he was late by five minutes only once in three years.

But by the end of those three years, Gustavo was ready to move on. As station manager, he had not had one day of vacation in more than a year. But the deciding moment was the third time the station was robbed while he was on duty. Highland Park had become more and more gang-infested, and that night one of the gangsters held a gun to his head and said, “If you say anything, we’ll kill you. We know where you live.”

That did it. Gustavo headed to the airport and asked the Alaska agent for a ticket to the farthest place a plane was flying that day. It turned out to be Fairbanks.  He arrived in Alaska in August 1989, finding shelter in a hostel along with a pack of mosquitoes.  He also found a job at China Gardens, a restaurant run by a Japanese owner. The man put him to work washing dishes, cooking and cleaning alongside his three children. But after a few months, he refused to pay Gustavo. When Gustavo protested, the owner threatened to call Immigration. Armed with his legal residency papers, Gustavo retorted, “Go ahead!”  The owner’s wife eventually compensated him, and the police finally arrested the man for violating child-labor laws with his own children.

During the Exxon Valdez oil spill, Gustavo was working at a salmon cannery in Valdez for minimum wage--$3.75/hour. His work took him where the salmon swam—to Petersburg south of Juneau and then to Anchorage. There he lived in a homeless shelter with hours from 6:00 p.m. to 6:00 a.m. He had to move out with his belongings every morning and move back in with them at night. From trashcans, he ate leftover pizza slices still in the boxes; from weekly summer festivals, he loaded up on free hot dogs; and from grocery stores, he scavenged expired peanut butter and bread.

“When you sleep on a park bench and have nothing,” he said, “your priority is to put something in your stomach. I always worked for food, not money. I’d knock on a door and say, ‘I’ll clean your yard for food.’ But living this way, you learn you don’t need a car, a TV, a cellphone, a schedule. You have freedom.”

In 1990 Gustavo found steady work with the Peter Pan Seafood cannery on one of the Aleutian Islands. Winter was crab season; summer was salmon; and every two months, halibut. He had a room, three meals a day, and a near-by laundry. In summer he even joined some of the fishing expeditions for salmon, halibut and cod.

In 1993 things got even better. He earned the second highest grade in his class at the Travel Academy in Anchorage while studying to be an airline cargo agent. Then Mark Air hired him to load and unload passengers’ baggage and freight in Barrow, a seaside town on the Arctic Ocean near the oil fields at Prudhoe Bay. During his time there, he became proficient at doing weight-and-balance calculations for 737s.

On January 1, 1994, Gustavo found himself a beautiful wife, but she didn’t know it. He was thirty-one; Angeles was twenty-seven and besieged by suitors. Gustavo had returned to Constitución to celebrate the Christmas holidays with his parents at their home in the farming valley ninety miles south of Loreto and a short distance inland from San Carlos, where he'd grown up. Patiently and shrewdly he pursued her. He saw her at a New Year’s Eve party, learned her name, got her number from a friend, and called her up after he’d returned to Alaska. For the next year, he courted her by long-distance telephone.

When he returned to Constitución the following Christmas, he knocked on her door and gave his name to her sister, but Angeles refused to see him. She wanted to maintain the long-distance relationship, with its romantic elements of remoteness and mystery, just as it was. So he managed to run into her at the local gym, where they both happened to be working out, and he invited her for ice cream. She said yes. Only after she had warmed up to him in person did he tell her his name. They were married in 1995.

The newlyweds moved to Chihuahua and opened a clothing store. In the summers, Gustavo would return to the cannery in Alaska to earn extra money. During those years, their children, Gustavo and Carolina, were born. But Gustavo was restless. As he said, “I wanted to live near the ocean. Without it, I didn’t feel complete.” He had fond childhood memories of camping with his family at Juncalito, Ensenada Blanca, and Loreto Bay during Holy Week. He wanted “a quiet, nice, safe place” to raise his children, and he wanted them to live closer to their grandparents in Constitución.

So in 2005 Gustavo bought the land for his shop on Highway 1 in Loreto. He sold his house and store in Chihuahua, which barely paid for the roof of his new store. As it was being built, he lived in a pick-up truck in Loreto while Angeles and the children stayed with her family in Constitución. When the store first opened, he sold plant pots, then patio furniture.

Gustavo’s timing was fortunate. When he set up shop, he knew nothing about the burgeoning development
at Loreto Bay. During the next years, with over six-hundred brand new homes to furnish, Canadian and American customers flocked to his shop, eager for indoor and outdoor furniture, patio umbrellas, ceramic tiles, canterra stone, cabinets, lamps, tables and chairs, mirrors, rugs….

Gustavo, with his fluent, colloquial English and years of experience in Mexican and American cultures and with his flexible and creative problem-solving abilities, was in the perfect position to meet their needs. If he didn’t have what a customer wanted, he’d find it or have it custom-made in Guadalajara. Over the years his store grew in size and sophistication, adapting to customers’ requests. Currently the focus is on indoor household furnishings. From the spacious, well-lit, well-stocked showroom, it’s difficult to tell whether this is Baja or Palm Springs.

Today Gustavo’s life in Loreto seems less Homeric than suburban. Business is steady. I’m not as aggressive at selling as I used to be,” he says. “I’m calmer, enjoying life and my family more.”

He and Angeles have built a grand home along Highway 1 with a view of the Sea of Cortez. His “hobby” is riding his motorcycle. When he thrums by on the paseo in leather jacket and sunglasses, he could be mistaken for a Hollywood star. And he plays the tablas whenever he gets the chance, with Aguas Negras, the guitarist Herzon, or whomever is performing at local restaurants or events. He donates auction items to Loreto Bay’s philanthropic fundraisers, and his favorite extracurricular pastime is coaching a co-ed basketball team at his children’s school.

Reflecting on his life in Loreto, Gustavo says, “I’m really happy here. I love this place, the people, the peaceful life. This town brings me back to my basic life.”

Perhaps Homer’s Odysseus would have said the same thing when he returned home to his wife and son after fighting the Trojan War and wandering the world for ten years. Perhaps he would have said, “I love this place,” when he and Penelope settled down to live out their lives on the peaceful Isle of Ithaca with a view of the Ionian Sea.