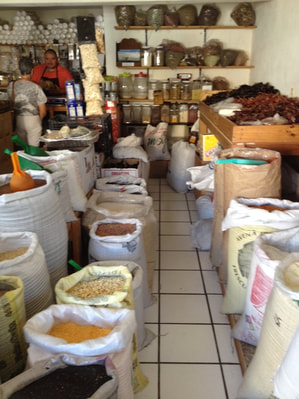 Seeds and Spices Sparrow Hawk. That’s the literal English translation for the name of Gabriel’s specialty market in the heart of historic Loreto. Why El Gavilan?  Gabriel feels a special kinship with the sparrow hawk because his nicknames are Gabi or Gavi.

The narrow aisles in his shop lead you past crowded rows of giant bags on the tile floor bulging with oats, rice, gluten-free flour, cones of raw sugar, sunflower seeds, pepitas, long spikes of cinnamon and more. Tin pails on shelves display mounds of curry powder and quinoa. Beside them perch jauntily stacked bags of dog food. And at the very back, behind the counter, sits Gabriel, calmly smiling, eyes alert, welcoming you in perfect colloquial  American English.
He offers you a taste of his prize spicy peanuts or the latest trail mix that he’s concocted. He shows you how to cook those mysterious little wagon-wheel-shaped pastas by plunking them in the microwave for several seconds until they puff up like popcorn. He dispenses household hints: freeze flour to kill the bugs that grow into weevils in the heat. And he explains the medicinal uses for the herbs he is happy to sell you--
arnica for bruises, gordolobo for sore throat and cough.

Born in Guadalajara, Gabriel grew up in Southern California with dual citizenship. Business has always been in his blood. As a child, he bought Smoky the Bear posters and baseball-hero souvenirs at ball games and biked around his neighborhood selling them to other kids.  In his two years of high school in Pomona, California, he was a natural leader. He boxed, he joined ROTC, he served as assistant coach of the women’s soccer team. As a sophomore, he became captain of the varsity football team. After his father opened a seeds-and-spices store in Ensenada, young Gavi, while finishing his junior year there, ran the store.

After high school Gabriel ricocheted back and forth across the border from job to job. He sold burgers at Carl’s Jr., trained telemarketers, sold timeshares, staffed a shopping-mall kiosk for T-Mobile, ran a pool hall in Long Beach. He finally opened a shop in Insurgentes selling seafood and spices. There he met the mother of his son, Luis Francisco, his only child.

To support his son, Gabriel returned to California to work for many months with no days off, wherever he could find a job. Eventually he found steady work in industrial construction, building big-box stores for Lowes and other chains. But in 2008 the Great Recession decimated the industry. After a stint as a door-to-door salesman for Southern California Edison, he returned to Baja for a Christmas visit and discovered that the town of Loreto had no seeds-and-spices store like the five his relatives owned elsewhere in Baja. Here was the chance to fulfill his dream of settling down with his son and owning his own business. He opened the door to customers in 2010.

Running a business in Loreto isn’t easy. Gabriel’s first challenge is how to keep the products, especially nuts, fresh. It can take fifteen days, or even thirty, for freight to be trucked from Ensenada or Guadalajara to his shop. But the biggest challenge is summertime. Since most of his clients are Canadians and Americans, 80% of Gabriel’s business drops off when they escape to El Norte during the intensely hot, humid, monsoon-riddled summers. During the long hot spells, his income barely pays the electric bills, which cost more than the rent.

Although Gabriel’s manner is low key, his mind is bustling. He’s street smart and on top of the local news.  And he has ambitions to make things better for his business and especially for his son, who has Downs Syndrome and attends a public school in Loreto for children with special needs. The school itself has special needs, and Gabriel recites the wish list: new tile to replace worn-out carpet, new wiring throughout the building, adequate school supplies, and much more. He does what he can and seeks new ways to support the system.

In recent years he has helped create the Luis Foundation, named for his son--a nonprofit that provides programs from cooking and swimming classes to workshops for personal improvement in the workplace for children and adults with special needs. The main office is located on the town square in the heart of Loreto.
On another front, Gabriel has begun a new business for tourists: he leads ATV rides into the canyons and along the foothills of the Sierra de la Giganta.

Like the restless, circling sparrow hawk, Gabriel, Gavi, is ever on the lookout for new opportunities. 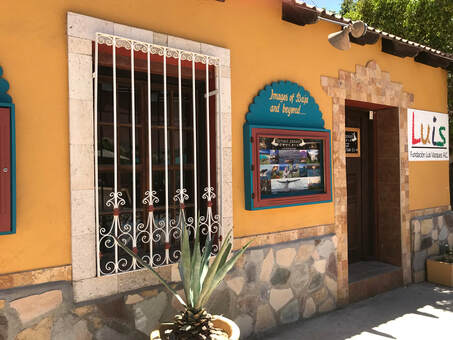