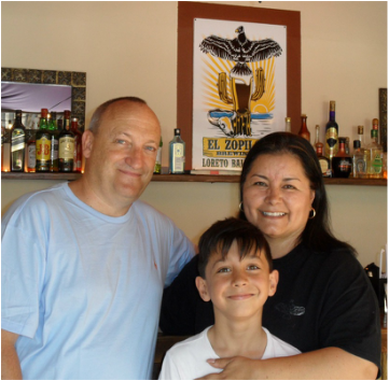 Owners: Norma Beatriz García Gordillo and
Kieran Martin Raftery
Beginning in 1697, Jesuit priests from across the world built the mission town of Loreto on lands inhabited for generations by three indigenous tribes. Fathers Salvatierra and Kino came from Italy, Father Piccolo from Sicily, Father Ugarte from Honduras. Early soldiers and settlers left their homes in these and other nations—Spain, Portugal, the Philippines, mainland Mexico—to build the struggling frontier settlement on the remote Baja peninsula.

So it’s no wonder that today one of the most cosmopolitan couples in Loreto, Norma Gordillo and Kieran Raftery, initially named their restaurant on Loreto’s historic town square 1697. However, recently, they have changed the name to El Zopilote--The Vulture.

Guests savoring scallop appetizers on their patio have a perfect view of the historic heart of Loreto. As they look past the stone gazebo and across the broad plaza, their eyes are drawn to the tall, imposing Spanish Colonial city hall. A block up the street is the mission, founded in 1697. A block or two down is the malecon (the waterfront walkway) and the harbor lined with fishing boats that roam the Sea of Cortez.

For Norma and Kieran, more than their menu is international. Norma grew up in the capital of the state of Hidalgo, Mexico. Kieran, born in South Wales, is proud of his Irish citizenship. Their nine-year-old son, who plays soccer and guitar and practices Tai Kwan Do, has two names: Patrick and Patricio.

Even Norma and Kieran’s first encounter was international. They met at dinner in a Mexican restaurant in Hong Kong.  Norma had been working in the country as a trade commissioner for the Mexican Bank of Foreign Trade. Kieran, a software engineer working at a U.S. company’s division in Australia, was there on a business trip. That was August 2002. In 2003 Kieran transferred to Hong Kong and took Norma on a trip to Ireland, where he asked her to marry him. In 2004 they wed, internationally: first a civil ceremony in Hong Kong, then a religious service in Acapulco.

Both gave up their careers to come to Loreto. Kieran had graduated from the University of Cork with a major in geology and several computer-science courses on his transcript. Although he landed a good software job with SIEBEL in London, he found the city too crowded and too expensive. He craved a friendlier, calmer place closer to wide open land and sea, so he convinced the company to transfer him to its Sydney branch.

Norma, who had studied history, international relations, and international trade at the University of the Americas in Puebla, first worked as an export assistant for a firm that manufactured auto jacks. A few years later, she was promoted to department head in the office of international trade at the Ministry of Economics in Mexico City. Next, at the Mexican Bank of Foreign Trade, she worked on financing and promoting companies that exported everything from buses to foods to textiles.

In 1999, succeeding in an intense competition with more than 400 applicants, she earned one of the bank’s ten positions for deputy trade commissioner and was soon promoted to full trade commissioner. From 2000-2005 in Hong Kong, she arranged sales of Mexican goods to China, promoted foreign investment in Mexican firms, and twice shepherded President Vicente Fox around Hong Kong.

By 2005 Norma felt she was hitting a glass ceiling at the bank and longed to return to Mexico. Meanwhile Kieran discovered that his heart was in customer relations more than software development. Both wanted to have a child and a new life. Mexico City offered career opportunities but an unappealing life style. The restaurant business looked promising because both of them had mothers who were excellent cooks, and, as Norma says, ”I’m used to good food.” But where? They decided to look for a small pond where they could be big fish. Rejecting Cancún and Puerto Vallarta, they settled on Loreto.

To lay the groundwork, in 2005 they moved to Ireland, where Kieran enrolled in cooking school. He then apprenticed with Norma’s brother-in-law, an Italian chef, while Norma learned bread baking. That fall she gave birth to Patrick, and they bought a “falling-down house” on the town square in Loreto, which required major renovations. Finally in June 2006, the new mother and father opened 1697 for business, featuring Italian and Mexican foods that they both loved—pizzas, pastas, fresh seafood, and a unique chili relleno. They moved into a house behind the restaurant and soon began renting out a couple of rooms to tourists. 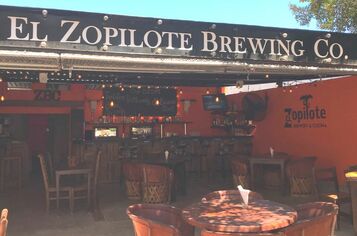 Since then, their business has not only survived the 2008 recession, it has grown and diversified and will probably continue to do so. Norma and Kieran now rent four budget rooms and are planning to expand to eight. In October 2012 they opened El Cardon, a cantina on the paseo in Loreto Bay.
At a few tables shaded by umbrellas out front, customers feasted on light and tasty Mexican fare and Kieran's craft
beer.  However, after a couple of years, the couple decided
to focus all of their energy on their Loreto business.

Alongside the restaurant, Kieran has launched his craft brewery. It supplies customers with three of his own brands. The best day to try them out, with a live band and deluxe service from an authentic Irishman, is, of course, St. Patrick’s Day. Don’t forget to wear green.

As for Norma’s old friends in Mexico City and Hong Kong, when they try to picture her running a restaurant “in a dusty little town in the middle of nowhere,” they ask her, “Are you crazy?” But Norma enthusiastically replies, “We’re very, very happy here!” Kieran smiles and nods in agreement. 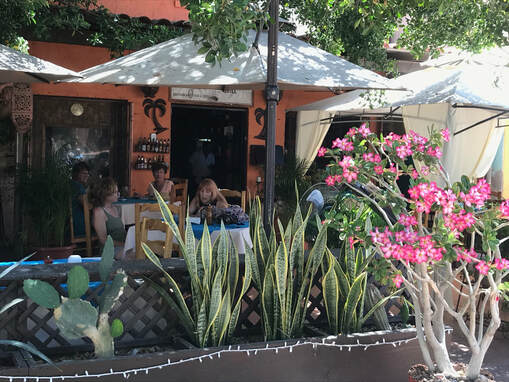