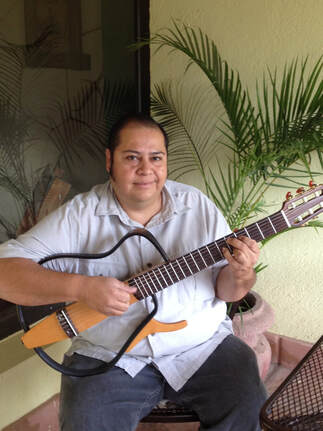 When Herzon writes, the fingers on his right hand form the letters. When he plays the guitar, the fingers on his left expertly navigate the frets. And when he talks, those left-hand fingers shape expressive gestures, still pressing imaginary strings.

Herzon D’ Laura is his stage name. His birth name is Herzon Ivan Rivera Galvan. Music is in his blood. He was born in the dynamic and prosperous central Mexican city of Querétaro. Officially founded in 1531, the heart of the city, with its elegant Baroque architecture, has been designated a UNESCO World Heritage site.

Surrounded by the city’s history and culture, Herzon grew up in a large, lively family of musicians and artists. His father, a guitarist and singer, was a member of a trio that performed romantic Mexican music and Cuban Bolero. His mother, a classical pianist, taught lessons to children in her home on an 1887 Mendelssohn upright bedecked with candelabras. Herzon says, “That piano was the jewel of the family.” Of his three older sisters and brother, one is an oil painter; the others, like him, are musicians.

Herzon took up the guitar when he was eight. His first song was “Ghost Riders in the Sky.” He taught himself to play not by reading notes but by watching and listening to his father. Still today he listens, learns and experiments. “My playing is very emotional,” he says. “I improvise. I can play with another performer without practice.”

Although his passion for motorcycles is unabated, Herzon at age 19 abandoned his study of auto mechanics after three years at a technical school. He chose instead to give himself over to his passion for music. For eleven years he performed in Querétaro, sometimes with his father or sister, for large public audiences at Plaza de Armas or for small private groups at house parties. While his sister, with her photographic memory, could hear a song once and play or sing it, he needed to listen two or three times.

In 2003 he acquired a highly prized Silent guitar by Yamaha. One evening, when he and his father were performing in a restaurant in Querétaro, internationally famous drummer Dave Weckl walked in. (Weckl was named “one of the best 25 drummers of all time” by Modern Drummer magazine.) As Herzon describes it,  "Dave listened to my music and liked it. People took our pictures together, and he signed my guitar.” But in Loreto in 2007, a thief stole the guitar, erased Weckl’s signature, and sold it to a local music store, cheap. When Herzon walked in to buy a case for his bass guitar, the storeowner, unaware of the theft, happened to show him his guitar. Herzon walked out with it, free of charge.

Just as he found his career in music through his father and mother, he found his way to Baja through his father and stepmother. When they were vacationing in Loreto in 2005, she sold ten of Herzon’s CDs faster than she could at home in Querétaro. “Come!” she implored him. “They sold!” So in December of that year, he came. And he stayed. For the New Year’s celebration on December 31, he performed at Hotel Oasis. “I ate chocolate clams,” he said. “There’s a saying in Loreto that if you eat chocolate clams, you’ll never leave.”

Again at his stepmother’s urging, he played in Loreto’s town square and sold CDs. On another free-lance gig, he vividly remembers playing “La Bamba” with his father at Posada de las Flores to a bar packed with enthusiastic margarita drinkers. They bought his CDs and dropped generous tips. The next step up was to secure regular dinners and a reliable salary. That happened when Juancarlos Cortes at Mita Gourmet said, “Come!” From 2007-2013, on Monday through Saturday evenings, diners and passers-by on the plaza would take long pauses to listen to Herzon’s captivating rhythms and creative takes on familiar melodies, as well as some original ones.

His styles and repertoire continue to evolve as Herzon explores new musical forms. He composes many of his songs, and now he accompanies his guitar by singing. His favorite song? Gary Moore’s “Still Got the Blues for You.” His favorite lyrics? Elvis Costello’s “She.”  Even more than his love of the Blues is his passion for jazz. Whether it’s the Blues, Bossanova, Bolero or Salsa, Herzon says, “This is the secret: Make them jazzy.”

Thanks to close and productive friendships with Americans he has met in Loreto, Herzon has performed in distant parts of the United States. In the summer of 2013 he and a small band of Loretano musicians played before a crowd of about 600 at Burning Man. This annual counter-cultural event draws tens of thousands of participants to Nevada’s desert to create a temporary metropolis, Black Rock City, which celebrates creativity, self-expression, and community. The band from Loreto also played three of Herzon’s original songs at the Black Rock City radio station. The high point came when internationally known American bassist Uriah Duffy invited Herzon to play with his band on the big stage for an audience of over 3000 fans. 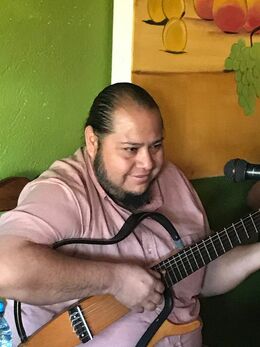 In 2015 Tom Kvanbeck, a dentist and amateur guitarist with a home in Loreto Bay, arranged for Herzon to perform at the Lake Superior Big Top Chautauqua music festival in Wisconsin, literally under the blue-and-white-striped big top. Since 1986 this annual summertime festival has been a major attraction featuring many top-notch musicians. On the way there and back, Herzon played in restaurants and at events from St. Paul to Michigan, where he performed at a party given in his honor. He recalls playing a song with his eyes closed that night, and when he opened them, the audience was in tears. Today Herzon’s life
is filled with music and family. His son, Luis, who is studying tourism
at UABCS in Loreto, often accompanies his father, playing bongos and congas. Thanks to her father and You Tube, his teen-age daughter, Fernanda, has learned to play the ukulele while completing her high-school studies. His youngest child, Ivana, born in 2010, loves to paint, like her aunt.

Meanwhile Herzon’s musical life flourishes. He continues to compose songs. He produces one CD a year. His name draws large numbers of devoted followers to his regular evening performances at Hotel La Mision and Pepegina’s restaurants, and to his appearances at private parties from Mulege to La Paz. He enriches the culture of Loreto by bringing in excellent musicians from mainland Mexico to perform with him. And his busy schedule is punctuated, now and then, by some memorable moments.

World-class trumpet player and Grammy Award winner Terry Townson, who recently settled in La Paz, has played with Ray Charles, The Temptations, Bob Hope, and…Herzon! Before an appreciative crowd at the public plaza by the mission, they improvised “Girl from Ipanema.” And not long ago a friend and fellow motorcyclist, Shaw Saltzburg, gave him a very good guitar made by his own hand. “I’m very lucky!” Herzon said. And the luck continues to unfold. On a recent visit to Loreto, world-class Italian guitarist Peppino d’Agostino, was so impressed that he videoed Herzon playing “Natural Boy” and arranged a 50% discount for him to buy a top-of-the-line Goden guitar. 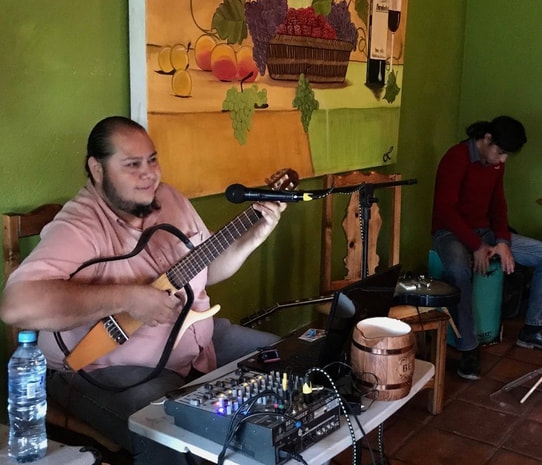 As for the near future, Herzon is looking forward to a trip to Cuba, which Tom Kvanbeck is arranging, where he and Luis will play in various venues as part of a people-to-people cultural interchange. And he hopes to return to Wisconsin’s Big Top in 2019.

As for the more distant future? “Have you heard the song ‘The Cicada’?” Herzon asks. “I am like the cicada.” And he quotes the song’s most moving line: “The cicada dies singing.