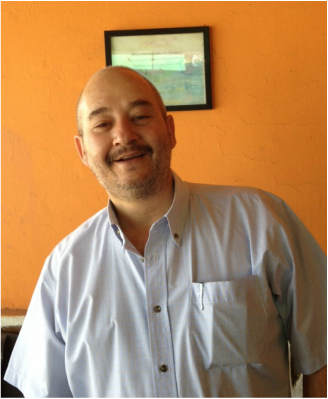 At Los Mandiles, you sit in sturdy wooden chairs as your dishes are served on the ubiquitous fringed Baja table-cloths woven in big, bright squares—chartreuse, hot pink, daisy yellow. Your sandals scoop pieces of gravel from the floor. A roof of thatched palm fronds offers shade from the intense Southern Baja sun. As a warm breeze sweeps in off the water, your gaze drifts across the malecon and out to sea, where you spot a raucous flock of pelicans and seagulls trailing a small, white fishing boat, a panga, that is motoring slowly toward the marina.  Perhaps the rigging of a sailboat fades into the hazy distance as it heads for a sandy cove on Isla Carmen. Or, if you’re lucky, just offshore, you’ll spot a pod of bottlenose dolphins riding the currents in synchrony.

The restaurant is simple; the view, dramatic; the food, fortifying. Fresh-squeezed orange juice and huevos divorciados (two fried eggs, one drenched in green salsa and one in red) make just the right breakfast before heading out to the farmer’s market on a Sunday morning. For dinner, the house specialty is mole poblano, a chicken-and-rice dish with a rich, thick, chocolatey-but-not-sweet sauce for the mole.

The name of the restaurant is puzzling. Los Mandiles literally means “The Aprons.” Gustavo Sanroman Fitch, in his fifties with close-cropped grey hair and intelligent eyes that don’t miss a beat, drops his initial reserve and becomes quite willing to enlighten you. He and his wife, Maria Eugenia, own the restaurant, and she manages the kitchen.

As for the restaurant’s name, “It’s a pun,” Gustavo explains. “A mandilon is a man tied to his wife’s apron strings.” And he gives you a sideways look with a sly smile. As for his un-Spanish surname, Fitch, Gustavo explains that, too: “My maternal grandfather was a U.S. mining engineer in Sinaloa.”

Somewhat of a Renaissance man, Gustavo is quite willing to teach you Spanish terms and many other things. He is a perpetual seeker of knowledge. Growing up in Mexico City, he interrupted his university studies in economics after two years because he had to go to work, first in a bank and then for La Bolsa. The purse? “No, the Mexican stock market,” he patiently explains. But just last year he earned his B.A. (In Spanish, it’s Licenciatura, he clarifies.) He majored in political science at UABCS, the university in Loreto, focusing on North American and European politics and economics. 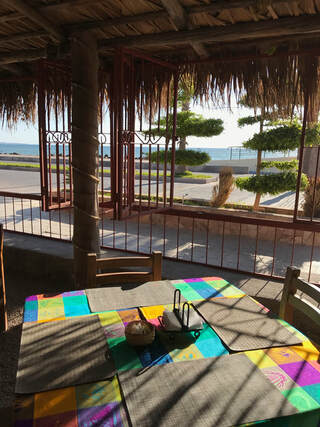 Next to the covered patio of Los Mandiles, the restaurant extends into a small stucco room with warm, orange walls and cool tile floor.  When he’s not waiting on diners, Gustavo is usually sitting at one of the blue plastic tables emblazoned with a Corona logo, reading. He reads everything—novels, histories, politics. Or writing. He writes poems, short stories, novels. Recently he’s been working on a novella about three friends from El Salvador, who migrated to the United States in 1978 during their country’s civil war.

Presidente Vicente Fox brought Gustavo and Maria Eugenia to Loreto—Fox and his government’s free-trade policies. According to Gustavo, they demolished the Mexican trade barriers, which caused domestic textile prices to collapse. Gustavo’s business in Mexico City was destroyed. With his Barcelona partner, he had run Textiles Contemporaneos, which had produced household fabrics since 1989. They had sold quality goods to Mexico, the United States, Colombia, Chile, Spain, France, Italy, and Israel. But with free trade, cheap fabrics from China, Taiwan, Japan and Korea flooded the market. In 2006 the partners closed the business, laying off forty-eight employees.

So why did he move to Loreto? For three reasons, it turns out. Gustavo wanted to escape Mexico City’s traffic, air pollution and crime—especially the crime. When his house was robbed, he said, that was the last straw. Also, the family had vacationed in Loreto and enjoyed it. But most important, his wife’s sister, Sofia Graciela, owned a restaurant in Loreto, Canipolé. In fact, Maria Eugenia had migrated to Loreto before Gustavo and, with a partner, opened another restaurant named Santa Lucia. When Gustavo arrived almost a year later, in 2009, they built their home in the Zaragosa neighborhood, closed Santa Lucia, and opened Los Mandiles.

But its future is uncertain. Gustavo is restless. His son is in Mexico City studying law, his brothers and sisters are on the mainland, and Baja is far away from them all. Perhaps he and Maria Eugenia will move to another small city closer to Mexico City--one with better services, more specialized medical care, cheaper flights.

But meanwhile at Los Mandiles, the waiters set the tables and tend their customers, the cooks hand-grind the spices for the mole, Maria Eugenia supervises the kitchen, and Gustavo reads. It may be a long while. After pausing to consider the options, he smiles at the irony of what he’s about to say: “I like Loreto too much!”