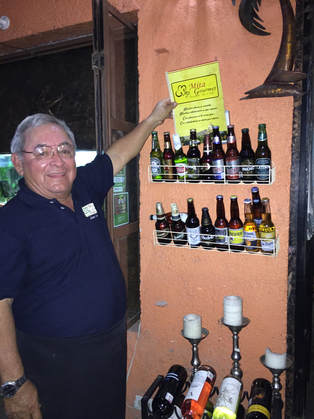 
Once you are seated at a table beneath the festive canopy of umbrellas on the tree-shaded patio of Mita Gourmet and the young server has brought you your margarita, a charismatic and authoritative older man steps up to take your order. He has a husky build, silver hair and a broad, sun-tanned face with alert eyes and a ready smile. You’ll notice the Mita Gourmet logo emblazoned on his polo shirt as he greets you.

He is clearly someone who loves good people and good food. Sometimes he lingers at your table to chat about the weather, fishing, golf, and the latest local news. This is Juancarlos Cortes. He and his wife, Marta Rebolledo, own this well-established, cosmopolitan restaurant that occupies a prime spot on the town square.

Mita Gourmet serves three meals a day. Its dinner menu offers a surprisingly wide range of international dishes: spaghetti from Italy, tepanyaki from Japan, chop suey from China, paella from Spain, chili rellenos from Puebla, chicken mole from Oaxaca, chocolate clams from Loreto….  Juancarlos takes special pride in the seafood dishes. He will cook the cabrilla (sea bass) you just hooked or the restaurant’s fresh catch of the day any way you like it, with a refined mango-salsa topping or, perhaps, Diablo style—“muy picosa.” Watch out!

The customers are as varied as the food. In winter, Mexican locals mix with Canadians and Americans of all sorts—expats, renters, snowbirds, cruise-ship passengers, motorcyclists, tourists disembarking from buses. In summer dorado fishermen mingle with visitors from France, Italy and Switzerland. Juancarlos’s recent ancestors come from around the globe as well--Uruguay, New Zealand, Italy, Spain. Born in Uruguay, he became a Mexican citizen in 1986.

His career is equally diverse. While Juancarlos is most notably a manager, in his lifetime he has been a professional athlete, an architect, a business-administration lawyer (licenciado), a hotel manager, and now a restaurateur—and he may not be finished. During the interview, when asked about his future, a mischievous grin crossed his face as he said, “I’m thinking about starting another business in Loreto.”  Although he may not characterize himself as such, he is also a learner, a teacher, and a philanthropist.

An only child whose parents had passed away by the time he was in his late teens, Juancarlos earned a scholarship to the Universidad Autonoma in Mexico City and a job playing professional soccer. He played for five years with the Pumas until a motorcycle accident permanently sidelined him. Meanwhile he put his university studies in architecture to good use with a firm that remodeled hotels. It was there that he met the father of his good friend, the man who would become his lifelong mentor and role model—Caesar Balsa.

Mr. Balsa owned the prestigious Mexican chain Hoteles Presidente. Under his guidance, Juancarlos learned every aspect of hotel management. His training began in laundry rooms, toolsheds, and kitchens. He served as a maid, a gardener, a dishwasher, a front-desk clerk. After three years in various positions, he was ready for his first executive job—assistant manager of the Hotel Presidente in Cozumel.

Over the next several years, he moved from hotel to hotel in the chain, serving in a range of management roles. He studied cooking at international gastronomic seminars and learned the art of turnaround management. Assigned to a struggling hotel in the chain, he would solve problems, retrain staff, hire and fire employees, revise menus—whatever it took to achieve success. Then he’d move on.

In the mid 1980s, he introduced the new model of the all-inclusive resort at Playa Sol Las Hadas, a world-famous getaway in Manzanillo and the location of the 1979 beach movie “Ten.” Romance was not only on the screen. There he met and married his bookkeeper’s secretary, Marta Rebolledo. Twenty years his junior, she has been his partner at home and at work ever since.

Over the many years of their marriage and the rearing of their three children, Juancarlos worked at various hotels. In October 2001 he came to Loreto to manage the new hotel on Loreto Bay that was owned by Fonatur, the federal bureau of tourism, and managed by the Camino Real chain. When he arrived, it was still under construction. On Valentine’s Day 2002, he supervised its grand opening. In less than a year, however, the Loreto Bay Company developers bought it, incorporating it and its golf course into their blueprints for the Villages of Loreto Bay.

This turn of events led to a critical moment for the family. When Camino Real issued Juancarlos’ next assignment to a hotel in Mexico City, his teenage daughter, Mita, rebelled. Loving her life in Loreto, she pressed him: “Why not open a restaurant here?” She and her two younger brothers, Alex and JC, were ready to settle down. Indeed, so were their parents. As Juancarlos says, “My kids were born in hotels, lived in hotels.” It was time for a lifestyle more compatible with raising a family. He took his daughter’s advice and is happy with the outcome: “Now we have a home,” he says. “We have stability. We’ve been in Loreto for thirteen years.”

After Mita Gourmet’s first year at the Plaza Hotel on Hidalgo, Juancarlos found a better locale. In 2004 he leased and restored the four decrepit walls on the current site and settled in. Today he says, “I’m retired.” And he is—from the hotel business. You might even believe it when you come across him sinking a putt on the Loreto Bay golf course or proudly displaying a framed certificate celebrating his hole-in–one on March 5, 2016. But he oversees the restaurant every day from 3:00 to midnight while Marta handles the breakfast and lunch shifts. 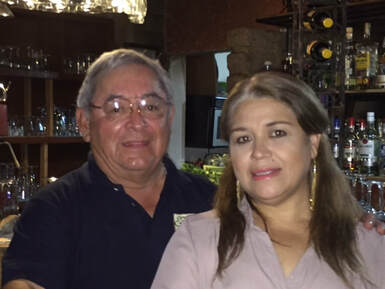 Marta, who grew up in a large family on a ranch in Jalisco, has had the stamina and  resources to raise three children while managing the restaurant’s kitchen, catering to a patio full of customers, and supervising the staff. She and Juancarlos hire inexperienced young Loretanos as servers, and he teaches them the skills they need to be successful.

He also teaches his customers. “I’m a passionate man,” he declares. “Passionate about what I cook and passionate about pleasing my customers.” He gives an example: if a customer orders an appetizer, soup, and salad before the main course, he will say, “This is too much food for you!” Then he will recommend the appropriate wine or the best combination of dishes, and he will tweak a recipe to add an ingredient she loves or subtract one she’s allergic to.

This attention to detail and focus on the customers pays off. Both the Aeromexico magazine and USA Today have published articles on Mita Gourmet, and the restaurant consistently ranks in the top 10 (out of about 70) in Loreto. Juancarlos proudly displays annual Trip Advisor certificates in the window of the bar.

During the interview, a thin young man with a collection of cans in a plastic bag on his back wanders onto the patio, stops one of the servers and mumbles that he’s hungry. Juancarlos is promptly on his feet, giving orders to make the fellow a burrito. While the man is eating it at a nearby table, a stray dog wanders in. Juancarlos gently and reluctantly claps his hands to shoo the dog away, apologetically explaining that while he would like to feed him, it’s against the law to allow animals in restaurants.

He and Marta support Animalandia, which provides services for strays, as well as Club de Adultos Mayores (CLAM), an organization that assists low-income seniors. Over all these years as a successful businessman and a tough and exacting manager, Juancarlos has tended a soft spot in his heart.