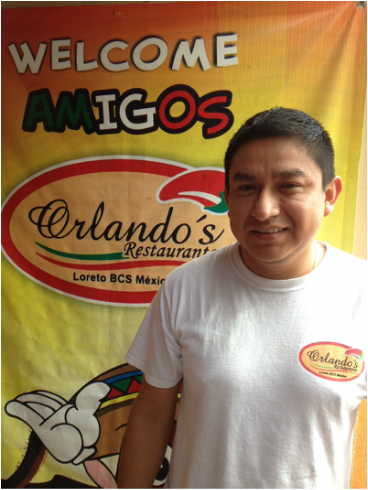 Francisco I. Madero between Benito Juárez Ave.
and Plaza Juárez


Orlando’s open-air restaurant on Madero is conveniently, and not coincidentally, situated next to a paletería—an ice  cream and fruitsicle shop. After his customers have devoured his classy tacos, they drop in for a homemade tamarind popsicle or a scoop of mango ice cream. The simple and casual outdoor décor of Orlando’s—gravel floor, plastic tables with serape-striped tablecloths, and double palapas for shade—belies the sophistication of the food.

Denizens of Loreto Bay who stop by for brunch after shopping at the farmers market on Sunday mornings or who meet friends for supper on Saturday nights can be overheard saying, “Orlando’s coconut shrimp is to die for!” Or, “Have you tried his sea bass yet?”

At age 31, Orlando has already built a popular and successful business. Trip Advisor has awarded it a Certificate of Excellence and listed it in the top three Loreto restaurants for the past three years. Baja Good Life has honored it for Best Breakfast and Best Mexican Restaurant. Orlando made it happen step by step. When asked what his goals are five years from now, he brushes the question aside; but when asked what he plans to do by next year, he’s bursting with ideas.

Although not a Baja native, Orlando has spent most of his life, and the most productive years of his life, in Loreto. Born in Veracruz, he learned the fundamentals of salesmanship early, helping his mother sell her tamales door to door. At age ten he visited his uncle in Loreto and loved it so much that he moved in with him.

His uncle owns Michoacana, the paletería next door, so Orlando grew up serving customers in the shop while attending elementary school across the street. He swam in the sea, walked the beaches with friends, played volleyball and soccer, and hiked in the mountains. Unlike many locals, he has fished only three times in his life.

In order to study business administration, Orlando completed his last year of high school in La Paz and continued his studies in international business in Ensenada, graduating from the Tecnológico de Baja California in 2006. As a student he sold insurance, and after graduation he ran the paletería for six months while his uncle was in Veracruz. He then spent a year sharpening his business and driving skills as an inventory manager for Philip Morris, responsible for the territory from Guerrero Negro to Insurgentes.

Orlando had to compete for this management position, which offered him experience, status and good pay. Although he sailed through the interview, the writing exam, and the psychological test, he ran into a hitch: he would have to drive a company car with a standard shift—something he’d never done. The employer offered Orlando the job on condition that he would be able to drive the car within one week; otherwise the job would go to candidate #2.

A helpful friend who owned a car with a stick shift taught him to drive it on mountain roads, and Orlando returned a week later, nervous but qualified. The employer gave him the job and the car, sending him off with the words, “Here are the keys.” Suddenly he was on his own with the unfamiliar car and the intimidating stick shift, trying to navigate the hills and the curves of Highway 1 with trucks on his tail, trying to downshift at stop signs without killing the motor. That first four-hour drive from La Paz to Loreto took him seven.

After a year at Philip Morris and a month’s vacation in Canada studying English and exploring Niagara Falls and Quebec with friends he met along the way, he rejoined his uncle at the paletería in Loreto. But he was itching to launch a new venture. So in 2007 he convinced his uncle to set him up in an ice-cream truck on the malecon. Unfortunately, by the time he opened for business, the crowds had migrated elsewhere. After a month of futile efforts to lure them back, he moved the truck to the vacant lot that his uncle owned beside the paletería. There it sat, and there it sits today. With its transformation from ice-cream truck to food truck to kitchen, it has been the cornerstone of Orlando’s immersion in the restaurant business. And in his signature style, that immersion has been step by step.

On October 14, 2009, Orlando’s food truck opened for business. He had equipped it with a small stove and refrigerator and furnished the vacant lot with sixteen plastic chairs around four plastic tables with umbrellas. He hired a cook—Noemi, his uncle’s housekeeper, who had worked in a restaurant. As for waiting tables, cleaning up, advertising, managing the money—those were his jobs. They sold tortas, burgers, egg dishes, pancakes, and soft drinks from 7:00 a.m.—3:00 p.m. From then on, his customer base grew rapidly, and with it, the business.

In 2010 he hired a second cook. By the end of the year, he had opened for dinner, added seafood to the menu, hired a dishwasher, and expanded the kitchen. In 2011 his sister from Veracruz joined him as a third cook, the original four tables mushroomed to ten, and he strung a shade cloth over them. In 2013 and 2014 he added five more tables and had the two palapas built, sturdily enough to survive Hurricane Odile. To celebrate the restaurant’s fifth anniversary, in November 2014, Orlando sold 350 tickets for a festive street party. Its success inspired him to hold another fiesta for 350 patrons in April 2015, this time donating the profits to Loreto’s school for children with special needs.

As for next year’s plans, he is building his own two-story casa less than a block from the restaurant on Madero. But it’s not just a house. He will offer two rooms for rent, eventually six. And he just may include “a bar downstairs with a soft ambiance” like the one he visited in Chiapas last summer.

Chiapas was Orlando’s most recent trip. He loved its lakes, pyramids, good food, good coffee, and especially the historic capital, San Cristóbal. And he visited San Miguel Allende in Guanajuato, the colonial city that inspired the architects who designed the Villages of Loreto Bay. In fact, Orlando has traveled to 30 of Mexico’s 32 states. He loves walking the streets of Cancún, Oaxaca, and Mexico City. He visits churches and museums, meets old and new friends, and gleans ideas for his business. Summer, when his restaurant takes a break, is his travel time. This summer he will spend a month on his own, touring the great cities of Europe—London, Madrid, Paris, Berlin, Prague, Rome….

Back at his restaurant, during slow hours Orlando sits at a table scanning the screen of his laptop.  He keeps up with international news and business trends. His curiosity, his willingness to take risks, his resilience when things go wrong, and his growing confidence are features of his entrepreneurial spirit.