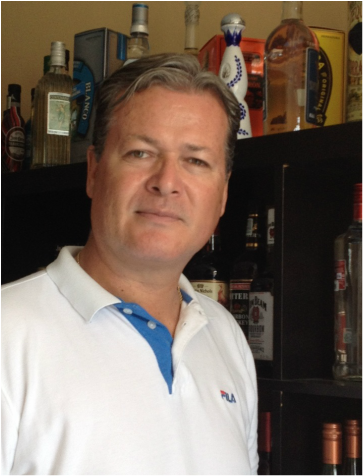 
Most Anglos around here call him Pedro. They don’t know his last name, but he doesn’t need one. Everyone knows him as just plain Pedro, and you frequently hear them say, “Oh, Pedro, he’s just great!” Or “I adore Pedro!” You will usually find him at one of his New Deli markets delivering supplies, chatting with customers, or serving them.

His delis sell high-class goods hard to find in Loreto but coveted by foodies, vegans, folks with food allergies, and gourmet cooks. Pedro imports the products from San Diego on bimonthly trips, and they are selling well. He rapidly runs through the lists: all-purpose flour, low-gluten flour, rice flour, corn flour, soy flour, organic flour, sweet-potato flour. Then there are the oils—hazelnut, truffle, olive, chia, peanut, sesame, coconut, avocado. He sells okra and tapioca, Ghirardelli brownie mix and Bisquick, Italian sausage and Black Forest ham, not to mention a vast array of cheeses and spices.

Pedro is not just charming and business-minded; he is also philosophical. And his life is full of irony. “Never have a passion for money,” he says. “If you have a passion for what you do, the money will come along. If not, okay. You still have your passion.” But, in spite of a few minor setbacks, he’s very good at making money.

And he loves Loreto, the “no-rush place,” where life is simple: “If it happens, it happens,” he says. “If not, okay. If you want to do something, you do it. Spend time with friends. Enjoy the things you see. It’s so nice around here. No one’s depressed. You live in the moment because no one knows about tomorrow. So every single day is the most important thing.” That said, Pedro sets goals for the future and strives to achieve them. He lives for his projects: “For me,” he says, “ to build something is like taking a breath of air.” And he works very hard.

He always has. As the tenth of a dozen children with a strong mother, he grew up in poverty in Guadalajara after she and his rancher father divorced. At age six, he decided to “escape” to work. When he finished his homework, he would tend to his projects: washing cars, weeding gardens, polishing shoes…. Over the years he made a lot of money—enough to buy his first car at age fourteen. And he kept on working, as an assistant to a mechanic, a plumber, and a carpenter. At fifteen, he started his first retail business, a snack shop. From these jobs, he saved enough money to put himself through private school and a university in Mexico City, where he studied business administration.

After graduation, Pedro took a job at Fiesta Americana Cancún and then Fiesta Americana’s Hotel Condessa, one of the highest-rated venues in the upscale Mexican chain. Over the next five years in Cancún, he was promoted from waiter to head waiter to sous chef to chef to food-and-beverage manager for the five restaurants in the hotel. They served Mediterranean, Mexican, Spanish, Italian and French cuisines.

“I was in charge of everything,” he says. But he didn’t let his new-found material success get the best of him. His philosophy has always been: “Fancy things are just fancy. When you wake up and see yourself in the mirror, that’s the truth.”

It was here that Cristina, who was also working in food and beverages, caught his eye in 1989. The magic of the Miss Universe pageant in Cancún brought them together. Pedro had met five of the Miss Universe contestants, who had asked him to go dancing with them. He invited along two businessmen friends from New York, who were thrilled to meet the glamorous women, and Cristina, who had been giving him the cold shoulder. To his surprise, she agreed to go. During the evening at the discos, he says, “I completely forgot the Miss Universes and never danced with any of them. Cristina and I talked the whole night.”

They were married three months later, and in another year Pamela was born, followed by Pedro and Cristina. Today Pamela and Pedro live in their parents’ home in Cancún, where she has recently graduated from La Salle University and he is studying business administration. Daughter Cristina manages Portobello restaurant at the airport between semesters at her university in La Paz. Wife Cristina and Pedro have formed a lifelong partnership at home and in business.

In 1992 a head hunter lured Pedro to Melía Hotels, a prestigious Spanish chain, where he worked for the next seventeen years, making a grand circle of the world: Panama, Costa Rica, Cuba, England, Italy, Spain, Germany, Argentina, Chile, Honduras and, finally, The Dominican Republic. He started as food-and-beverage manager, moved up to operations and soon became general manager, which had been his goal all along. Pedro changed countries so often because his job as general manager was to rescue failing hotels.

How did he do it? Theatrically. “General managers,” he explains, “are the best actors. They have to put on a bulldog face.” At his first meeting with the staff in Germany, for example, he received a cool welcome from the employees, who looked down on “this Mexican guy from a poor country, who eats beans.” So he threw down a challenge to them: They had been sitting around waiting for someone to bring cheese to the cows, he said. Instead they had to go out and find the cheese, or lose their jobs. And this beans-eating man from a poor country, he continued, knows the value of pennies. “Make every penny count!” He fired two uncooperative managers in his first three days. His bulldog face paid off. When he arrived, the hotel was in the red. By the end of his first year, it was in the black. By the end of his second year, profits had more than doubled.

Pedro spent his final three years in the hotel business first with the Hyatt chain, and then at Las Ventanas al Paraiso in San Jose del Cabo. He had planned to retire, but the double attractions of being food-and-beverages manager in the hotel rated #4 in the world for food and of meeting jet setters like Sandra Bullock, Will Smith and Adam Sandler hooked him. Still, after eighteen months, the gloss had dimmed. As he says, “When I start something, I want to be the best. I used to say to myself, ‘Some day I’ll be general manager.’ Then as general manager, I said to myself, ‘Okay. I’ve done that.’”

Pedro was ready for the simple life. In 2007 he inaugurated it in Puerto Escondido twenty-five minutes south of Loreto, where he opened his first Portobello restaurant. Friends warned him, “There’s nothing there!” But when he saw the sailboats anchored in the peaceful harbor with the rugged mountains encircling it, he thought, “I don’t care. If people like my food, they will come.” And they did.

For the first three months, he alone served as cook, bartender, waiter, dishwasher, buyer and bookkeeper. Once his customers had ordered, he’d tell them that he would be in the kitchen cooking their meals, so come on in if they needed anything. Within five months he had recouped his initial investment and was earning enough for venture #2—a mini mart next door. By 2009 he had saved enough money to open a third venue—the Portobello restaurant at the airport.

Pedro bought Dali, a Loreto delicatessen that was going out of business, in May 2013. “I was one of their best customers,” he said. So he decided to continue importing their high-quality products to Loreto. But the next winter, unable to negotiate a satisfactory agreement with the harbor authorities, he closed his Puerto Escondido restaurant and mini mart. By that September, Dali, was renamed "New Deli" and relocated across the street with Pedro's sister-in-law, Socorro, in charge. It was successful enough for Pedro to embark on his next project: a sister New Deli in Loreto Bay, where fifty percent of his customers lived.

As for new projects, Pedro says, “Now, for the moment, I consolidate.” But it’s doubtful that the moment will last long. One recent project has been making his home in a quiet area of Loreto environmentally friendly. It functions on water from a cistern, electricity and water-heating from solar panels, and cooking by propane. He is gradually building a small hotel next to it. “When high season is good, I’m building,” he says, “and when it’s slow, I stop. It may take three or four years.” He plans to add more solar panels to his delis. And, he hints, there may be one more restaurant in his future.

In fact, since 2018 that restaurant has come to life next to Pedro's New Deli in Agua Viva, Loreto Bay. Named Pedro's Place, it's a Mexican-style gastropub featuring Pedro as chief cook and his sister Maribas as hostess and manager. Tuesday nights are reserved for "Margaritaville," and Pedro's food and notoriously strong margaritas contribute to the festivities at many Loreto Bay musical, social and fund-raising events.

In his free time, Pedro says, “I like to cook for my wife.” He enjoys family time at home doing household repairs, tending the garden. But he interrupts these domestic activities with gigs at open-mic nights in local bars and restaurants. “I’m lyrico,” he says. “When I see a piano, I can play. A guitar is the same. I’m not all that good, but it’s fun.” And his repertoire is delightful and eclectic: flamenco, ranchero, mariachi, and a little bit of classic US pop, like “Susie Q.”

All the while, Pedro keeps the values of his life in perspective. “God provided me the talent to make business,” he says. “The worst that can happen is I’ll be the way I was before. I came from a poor situation. My mom cooked the most beautifully flavored beans. If I have to eat those beans again, I’ll be happy. It’s better spending my energy trying to do good things and not waste time on bad thoughts.... You need to do good for someone every day without expecting something in return.”