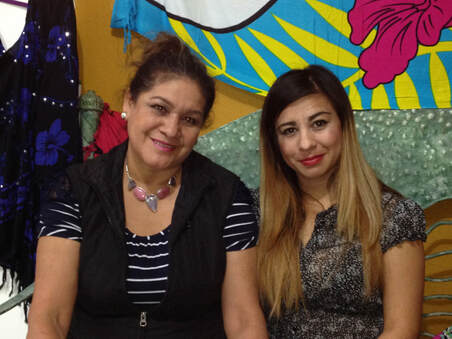 As a tourist exploring the historic heart of Loreto, you are likely to experience déjà vu. Walking beneath the laurel arches lining Andador Salvatierra (the pedestrian walkway) you may be drawn to the tasteful silver jewelry and T-shirts at Silver Desert. Its logo of a festive sun by the entrance beams at you. As you continue past city hall and cross Plaza Juarez, the town square, you will discover another Silver Desert with the same smiling sun greeting you. You may even see the same colorful T-shirts displayed out front. The two shops are one business run by two women from one family—a mother, Maria Teresa Mendoza, and a daughter, Rossana Yañez. Their lives, day by day, are intimately intertwined.

The motto for Maria Teresa’s life is “work, work, work.” Over the years, despite personal and professional setbacks, she has persistently kept her eye on the goal of owning her own tourist business. She saved money, she raised five children, she work-work-worked, and she did it! More than once.
Maria Teresa was born in Tlahualilo, Durango, one of twelve children of a farmer who grew cotton, corn, beans and watermelons. Seeking opportunities in a wider world, at seventeen she joined her older brothers in Cancún, where she sold men’s suits in a department store. Amid the glamorous dances and glitzy festivals of the booming resort city, she met Alejandro Yañez. In 1980 they married and settled in Loreto with the shared dream of running their own business.

Why Loreto? At that time Fonatur, the recently formed federal trust for promoting tourism, had chosen five sites for investment and development—Cancún, Los Cabos, Huatulco, Ixtapa, and Loreto.  Loreto looked the most appealing to Maria Teresa and Alejandro because it was still a small town, one that would grow along with their enterprises. Once they arrived, “All the people from Loreto opened their doors for us,” she said. “That’s why we decided to stay.”

In half a year working in local hotels, the couple saved enough money to become the second managers of two shops at the original Loreto airport, which they ran for a decade. The airport supervisor at the time, Ildefonso Green, told them, “You are very hard workers, so I’m going to give you these spaces.”

Maria Teresa ran the souvenir store; Alejandro ran the liquor store next door. At night she printed T-shirts. During the days her first baby, born in 1982, kept her company as she sold T-shirts, tobacco, chocolates, and handcrafts. After a year she was ready to take on more challenges. She opened three tourist shops in a row on Andador Salvatierra: Curios Teresa; T-Shirt Oasis; and Disco Fiestas, which offered ice cream, sodas and beer in Tony Silver’s bar.
That was before the economy collapsed. In the recession of 1991, Aero Mexico and Air California planes stopped landing in Loreto. Cruise ships stopped docking. Tourists evaporated. Maria Teresa and Alejandro sold everything—the five shops, their home—and took their two daughters, Gabriela and Rossana, to Cuernavaca. After a six-month hiatus with relatives there, they returned to Loreto. Maria Teresa has never left. By 1994 she was the mother of four children. Her husband had become the third most powerful political figure in Loreto. She had opened a store that doubled as their home on the site of today’s Silver Desert on the town square. Her long-distance telephone business soon turned into a T-shirt shop. In 1996, when her fifth and final child was born, Maria Teresa rented a second shop, the Silver Desert that she runs today on Andador Salvatierra. It features elegant silver jewelry from Taxco and other towns in mainland Mexico. 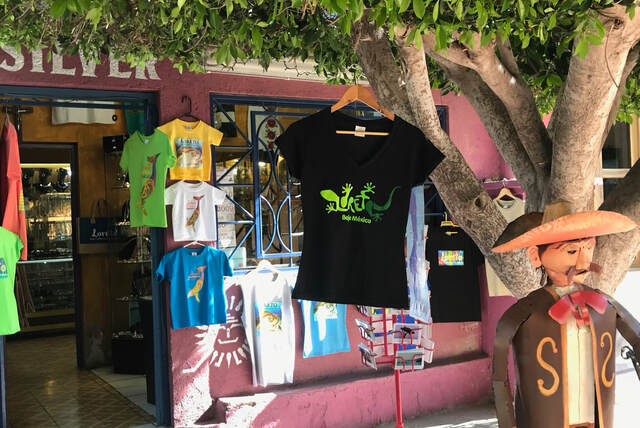 By 2010, seven years after she and Alejandro had divorced, Maria Teresa arranged to have the old shop on the square demolished and resurrected as the new Silver Desert. She had saved money for years to bring this dream to life. And the dream became even more precious when Rossana, who was exploring possibilities for her future, chose to run the brand new shop, which opened that December.

Rossana’s Facebook page displays a quote from St. Francis of Assisi that speaks to who she is:

Rossana is an artist. As a child, she loved to draw and paint. In high school, while doodling in her drawing notebook, she created the sun design that became the Silver Desert logo. As a university student in Guadalajara majoring in graphic arts, she designed the T-shirts for sale in her mother’s shops. After a year working in a printing company, she returned for a Master’s degree in jewelry design.

During her student years, Rossana traveled widely and volunteered through the Catholic Church. She backpacked across Europe. She met the Pope while volunteering at the World Youth Day in Cologne, Germany. From her volunteer work in Guadalajara for a youth-leadership-training program, she secured a three-month job in India designing and marketing jewelry. At a monastery in the Himalayas, she met the Dalai Lama. Living with fellow students from ten countries, creating jewelry with real diamonds and gold, and traveling to jewelry events around India opened her mind and heart to the world and her artist’s eye to Indian palettes and patterns.

So when she returned to Loreto and took charge of the Silver Desert on the town square, Rossana brought with her the flavors and styles and colors and textures of the cultures she had encountered in Italy, France, Portugal, Spain, Germany, and especially India. They have become so much a part of her that she blends them with Mexican traditions in the jewelry she creates from Loreto’s natural materials.

When you visit her shop, you will find key chains, water bottles and flip flops for sale along with T-shirts and fans, many of which she has designed. Most significantly, you will discover her jewelry. It is an ongoing experiment. In her pendants and earrings, she fuses sterling silver with local amber, stones or baroque pearls from the Sea of Cortez. Her pieces evoke familiar naturalistic forms—cholla or cardon or even an orchid. The workshop is in the back of the store, so when customers are absent, Rossana creates. Every year she tries out a different technique. After she studied with a Japanese silver master who came to Guadalajara in 2016, she incorporated some of his techniques into her floral designs.

Today Maria Teresa’s and Rossana’s lives are rich in creativity and generosity, kindness and love—and work, work, work. For years they have loyally supported Eco-Alianza, a local nonprofit dedicated to protecting the environment. Both adore children. Maria Teresa says, “If I had a lot of money, I’d have a lot of kids.” So they shower their love on Rossana’s child, Santiago, born in October 2017. Santiago spends his days in the shop with his mother, just as she had done as a child. In fact, some clients remember her sleeping on the floor and say with a laugh, “Oh! You’re getting so old.”

And at the core of their lives is their work, infused with the mutual respect and affection the mother and daughter share with each other and with their customers. As Rossana says: “All those stories and friendships! It’s always good to keep in touch beyond selling. It makes you grow and gives meaning to life. My customers want to get involved in the culture, in people’s stories. That’s what made me come back to Loreto. I love this place, and my jewelry is from this place. More than money, it makes me satisfied with life. When my customers buy my pieces, they take a piece of Loreto home with them.”