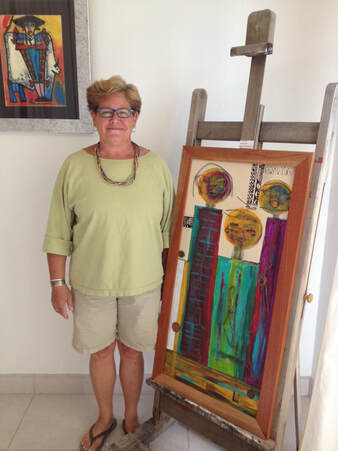 
Lisa’s heart is warm, her mind is curious, her imagination is ripe, her smile is irresistible. When you enter Studio 908, her workshop and gallery in Agua Viva, you feel welcomed into her home, which happens to be upstairs.

In the gallery you’ll find pieces of her own work on display—a wild mixture of exciting experiments that blurs the distinctions between art and craft, high art and folk art. A vivid, framed painting of a floating vase of flowers graces the wall above her desk. (It is not for sale.) But some of her pieces are harder to label since they mix painting with rusted wire or discarded bottle caps from Loreto Bay construction sites, or fish vertebrae and wave-worn stones from the beach. Are they sculptures? Collages?
Lisa has also created weavings and baskets, pottery and necklaces; but she currently focuses on painting, sculpture, and mosaics. In the gallery you may come across the rich textures in her mosaics, where glass beads join beach stones, and irregular bits of colorful ceramic tiles to embody a peaceful historical scene by Loreto’s mission or a lively cactus. And some of her sculptures incorporate mosaics. In spite of the diversity of her work, it’s not hard to find the common thread that winds through all of Lisa’s artistic expressions. It spins from the spool of her playful and exuberant spirit. 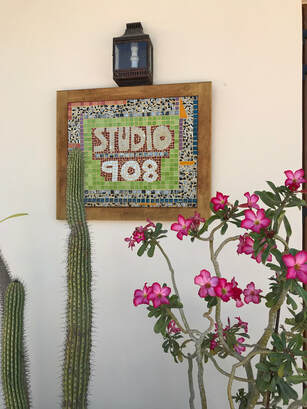 As a child in Westchester County, she climbed all over Henry Moore sculptures in the garden next door with her seven-year-old beau. His father was the art collector who owned them. “From then on,” she says, “I saw art as something to be a part of.”
​
When she was ten, her father, a science teacher, moved the family to Uganda for two years while he taught teachers at a university in Kampala. There she discovered African folk art, which her parents collected. Its forms, colors and figures continue to appear in her art. Returning with her family to New York City at age twelve, Lisa studied at the private Ethical Culture Schools, where her father served as headmaster.

Another early influence on her artistic vision has come from the American Southwest. Lisa has loved the desert ever since she used to visit Tucson to be with her grandmother, who was an artist. “She was the person who was always there for me,” Lisa says. “I adored her.” In New Mexico on a vacation she visited Georgia O’Keeffe’s home, and she has never forgotten the hodge-podge piles of desert rocks the famous artist had collected. Lisa’s own fascination with rocks plays out today on the stairwell connecting the studio to her home above, where precisely constructed miniature cairns on the edges of the steps mark the climber’s progress.

Lisa’s post-high-school years were a time of restless searching. She studied art at U Mass. Amherst for a while but moved on. She filled raw dough with jelly at Dunkin’ Donuts, scrubbed pet cages for a vet, tried to live in LA. None of it stuck. But at age 20 she settled in Oakland, where she graduated from the California College of Arts and Crafts with a degree in textile art.

In her mid 20s, Lisa put her passion for art on hold to make a living. “Some day,” she thought back then, “I’ll get to be an artist.” She held down a variety of routine jobs until she became a single parent of two daughters, born in 1982 and 1987, and realized she needed to make some serious money to support them. For five years she worked as a realtor, but since the hours were incompatible with rearing her girls, she became a mortgage broker. With two business partners in Berkeley, she started a company, KLA Mortgage, which supported her family well into the 2000s.

In the mid 1990s, a six-week teachers’ strike shut down the Oakland public schools, which her girls attended. The crisis goaded Lisa to move to Marin County with her daughters. In the backyard of her new home, she built an art studio, making the most of the opportunity to return to the passion that, she says, “nourishes my soul.” In her spare time, she took up ceramics, sculpture, and jewelry-making. Three-D works felt right to her back then; painting did not, until one day she picked up a canvas and “it clicked!” 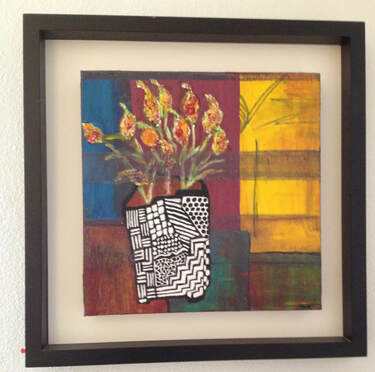 One time when a friend broke a china plate, Lisa recalls, they started playing with the pieces. That’s when mosaics elbowed their way into her repertoire. She is still playing with the pieces because the pleasure of creating mosaics overrides the pain: “”I love them and appreciate their history,” she says. “But it’s physically taxing. I cut my own tiles, and it’s hard on my back. It’s a labor of love.”

Lisa found Loreto Bay by chance in 2006, when a client asked if she could arrange mortgages in Mexico. At that point, with her daughters grown, she had been considering retiring from the mortgage business and finding a new home where she could make a living as an artist. Santa Fe was high on her list. Santa Fe, however, was missing one leg of the stool. Lisa dreamed of an artist’s life in its deserts and mountains, but it was without an ocean. So when she visited Loreto Bay, the three pieces fell into place. As she says, “I was drawn to Loreto. It was a magical place.”

In 2006 she bought a rectangle of chalk lines in the sand with the promise of a Casa Alta—a home above a commercial space in the second neighborhood of Loreto Bay, Agua Viva. Progress toward achieving her dream was halting. When the Loreto Bay Company failed in the summer 2009, her building was still in the early stage. Lisa had to find her own contractor to finish the job. One of the silver linings at this precarious time was that she could customize her home’s interior to satisfy her needs.

The other silver lining was even more valuable. In 2010 she clinched a very good deal to buy the cavernous commercial space downstairs, even though at the moment she didn’t know what to do with it. In 2012, when the building was finally finished, she took a tentative leap of faith: she rented her Marin house, took an eight-month leave of absence from her mortgage company, and lived in Loreto Bay. All the while she was thinking, “Maybe I can be an artist there.”

From then on she has become not only an artist but also a magnet and catalyst for other artists in the Loreto area. In 2012 she taught mosaic classes in her studio. In 2013 she offered the space for a homeowners’ art show. Then she produced the first show featuring women artists from the Miramar neighborhood in Loreto. For that groundbreaking event, she and two friends curated, priced and displayed the women’s wares. Since then the Miramar women have been selling their works at Lisa’s gallery and in various venues in town. And the same year, 2013, she cut herself loose from her past. Selling her Marin house and quitting her mortgage business for good, she became a full-fledged Loretano resident and artist.

As she was creating art works and organizing shows, Lisa came to realize that something was missing: Loreto Bay needed an art gallery. So in 2015 she began traveling around mainland Mexico buying artists’ works to sell in her new Studio 908. As she says, “I was so excited by contemporary and traditional Mexican art that I thought others would be, too. And I could make a bit of a living at it.”
​
So now, when you walk into Lisa’s gallery, along with her own works and those of local artists from the Loreto area, you’ll meander through an eclectic collection of embroidered bags, silver jewelry, leather purses and traditional weavings from Oaxaca; paintings from San Miguel Allende; pottery from a talented family in Michoacan; digital photography by other ex pats, and more. Perhaps that small table with the wrought iron legs and bright mosaic top will catch your fancy. And you may find Lisa hovering over a large table in the adjoining workshop clipping and sorting colorful tiles for her next mosaic project. 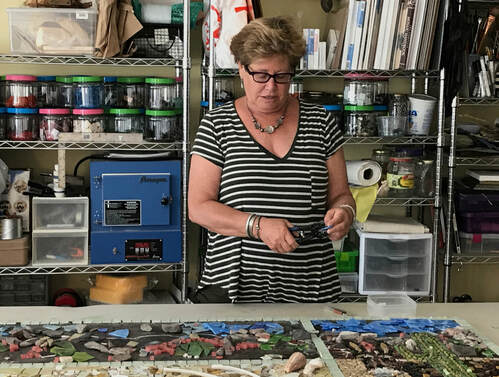