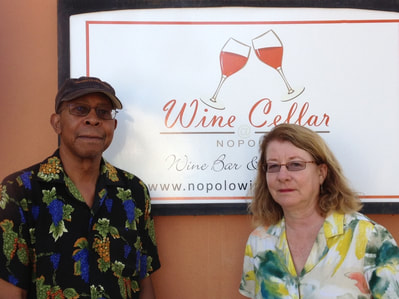 Owners: Cynthia Laird and Will Cosby


They found each other at a bar in Los Angeles in 1995. He was Black; she was White. He came from the Southwest and “the opposite side of the tracks” in South Central LA; she came from the Northeast, an industrial Canadian city near Niagara Falls named St. Catherines.

Will Cosby and Cynthia Laird married on the Caribbean island of Antigua in 1997 and discovered Loreto, by chance, when celebrating their first anniversary. Since New Year’s flights to Cabo were full, Aero California suggested Loreto. They said, “Why not?” That spur-of-the-moment decision transformed their lives.

Loreto in those days, as Will describes it, was a sleepy fishing village of dirt roads, with kayakers, fishermen and tourists lounging around the square during the siestas in the lazy afternoons. (Loreto Bay was a beach by an old golf course.) It didn’t take Cynthia and Will long to fall in love with the place. They returned year after year not to golf, fish or practice Spanish but to drink, read and relax. Loreto was the perfect escape from their busy LA lives. From their home near LAX, they could hop on a plane and step off at Loreto’s little, palapa-covered, open-air airport 90 minutes later—quicker than they could get to Palm Springs in Friday-afternoon rush hour.

In spite of their frequent visits, it was not until 2005 that they succumbed to the marketing hype of the Loreto Bay developers and bought a place of their own. That April, during a promotional launch, they stuck a pin on the map to mark the lot for their new casa on the Paseo. Although it was completed in September 2007, they didn’t settle in full time until 2011. That year Cynthia’s job in L.A. abruptly ended. And that year, not coincidentally, the Wine Cellar @ Nopolo became a vision, then a reality.

The idea had been inspired by Cynthia’s conversations over many months with local businesswoman Nellie Hutchison, whose survey of homeowners in Loreto Bay had convinced her that a wine bar would meet a community need. Once she had convinced Cynthia and Will to give it a try, Nellie guided them through the legal maze of incorporation and licensing.

The action began in September. Will and Cynthia leased the space the bar still occupies by the fountain on the Paseo. They hired fellow homeowner and architect Peter Boddy to create floor plans for turning the huge, empty room with a fat column in the center into a full-fledged bar. They bought furniture. They stocked the bar and created a menu of appetizers. They hired and oriented a bartender, Urbano, who is still behind the counter. They chose a name: Wine Cellar @ Nopolo for Will and Cynthia. And six weeks later, on October 23rd, 2011, they opened for business—a business that has been thriving ever since.

When she was studying chemistry at the University of Waterloo, Cynthia would have been amazed to think that she would one day be proprietor of a Baja bar. After graduation she worked for a Toronto consulting firm, producing regulatory updates and conducting corporate seminars on environmental health and safety. She advised Shell, Bombardier, and other international corporations with as many as 40,000 employees. Later she moved to another branch of the firm, where she analyzed compensation surveys for corporate clients. Her firm flew her back and forth between New York and Los Angeles until 2011, when another company acquired it and laid off staff, including her.

Will grew up on welfare with a vision for his future: “As a Black kid growing up in the ‘60s in LA, I wanted something different.” After high school, he took advantage of the opportunity to expand his view of the world at the United States Air Force Academy in Colorado Springs. “I was one of the smartest kids in my high-school class,” he says, “but one of the dumbest in the academy.”

Nevertheless, he became an Air Force officer and navigator. “I volunteered to go overseas,” he quips, “and they sent me to a foreign country—Arkansas.” Based in Little Rock from 1976-1980, Will served on flights ferrying personnel and equipment to military bases around the world. Life in Little Rock was not easy for a young, single, Black, male Air Force officer. When he bought a house on an all-White street, six families moved out.

In 1980 he volunteered for special service as an Air Force recruiter. Assigned to Long Island, he became Director of Operations, leading a staff that recruited candidates in the greater New York metropolitan area. But in 1982, after more than six years in the Air Force, Will quit. He found himself confronting a moral conflict that had been building within him: “I was a pacifist,” he says. “I didn’t want to ever have to take someone’s life.”

For the next 29 years, Will made ample use of the marketing and managerial skills he had honed in the Air Force. At AT&T he worked as a “sales dude” (account executive), selling phone systems to businesses. At United Airlines, he negotiated contracts with travel agents and managed a sales staff. In 1994 he returned to LA as a regional sales manager for Hertz, eventually becoming vice president of the Western Division. By 2011 he’d become increasingly frustrated with Hertz’s reluctance to provide adequate resources for his job managing global sales to military bases. So when Cynthia proposed opening a wine bar in Loreto Bay, as Will describes it, “It took me fifteen minutes to say yes.”

Today the Wine Cellar runs smoothly, with a clear division of labor. Will manages the front of the house and buys the beer, wine and liquor. Cynthia manages the kitchen and the staff. Their seven employees come from the Miramar neighborhood of Loreto, five of them from one extended family. The business has come a long way since the day it opened with Will as dishwasher; Cynthia, cook; and Urbano, bartender and server.

The biggest hurdle they currently face is the high price of wine because of transportation costs and Mexican taxes on domestic and imported bottles, which range from 36-45% plus sales tax of 16%. Still, Cynthia says, “We serve good wine, and while it may not be the most inexpensive, it’s handled and stored properly. We know our selections and can make solid recommendations to our customers based on their palate preferences.”

As for the food, the menu consists of small plates. Will claims that “two small plates will fill up anyone.” Cynthia, a lover of cooking since her teens, is in charge of the recipes, and her menu tends to shift and expand. Offerings include Tacos Americanos, Pizzadilla, and Quesadilla Cubana. 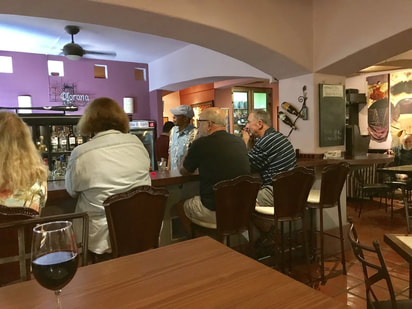 The interview with Will and Cynthia started on time at 2:00 in the cozy rear corner of the bar, in armchairs around a low coffee table. Promptly at 3:30 the front-of-the-house staff arrived in uniform—casual polo shirts with Wine Cellar logos. Cynthia checked her watch: time to start cooking. As our interview wound down, the staff, with cheery efficiency, unpiled chairs from the tables, drew up the shades, and restocked the bar. Everyone knew exactly what to do.

At 4:00 the first customers drifted in, sunburned and thirsty. By 8:00 the place was packed. Music was thrumming, TV screens were flickering with a hockey game, servers were hustling, and customers were flitting from table to table greeting new arrivals and old friends. Will circulated, gesturing broadly, chatting up a pair of first timers, and even belting out a Satchmo song. Cynthia, behind the counter, served up her own reserved brand of hospitality with an occasional wry smile. Voices rose and fell, blending and blurring in a raucous melody, a convivial sense of community. 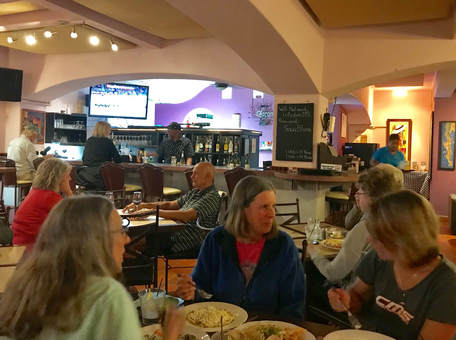